Buddhism and Psychotherapy: Enlightenment in Counselling 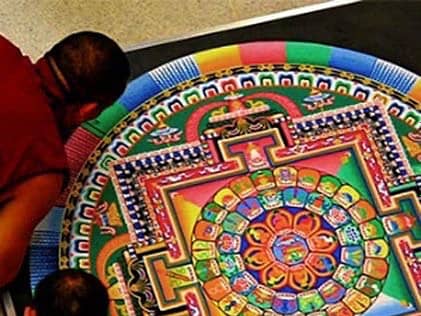 “We are shaped by our thoughts; we become what we think. When the mind is pure, joy follows like a shadow that never leaves”.

Buddhism psychology and psychotherapy often go hand in hand. But who is the man who became Buddha and how is his life relevant to counselling today?

In many parts of the world, the birth of the Buddha is celebrated in the middle of May.  Buddha simply means ‘one who is awake’. His birth is marked at differing times of the year because different calendars are used. In mainland Asia and Tibet, Buddha’s birthday is celebrated on the first full moon of the 6th month of the Buddhist lunar calendar, which is 12th May.

The Buddha was born into a very privileged life.

Prince Siddartha Gautama was born in Nepal about 2,500 years ago into immense wealth. His family protected him from the harsh realities of the world such as poverty and death. They pretended human suffering didn’t exist.

But when Siddartha realised they did exist (at the age of 29) he left his gilded lifestyle in search of meaning. He became a wandering spiritual seeker, living an ascetic life of physical deprivation. He was in effect trying to free his Spirit by denying the needs of his flesh. This harsh life lasted six years, until Siddartha decided to trust his instincts. He began to nurture his body and turned his attention within.

So, he sat down under a Pipal tree determined not to move until he found the answers he was looking for. He did his meditation practice and spent 40 days (like Jesus and Mohammed) being tested.  The Demon Mara tormented Siddartha, shown in this picture of the Wheel of Life or Samsara (earthly life). Mara is encouraging grasping and attachment to worldly sensual pleasures.

Enlightenment is simply lifting the veils of ego so that we can see the world as it is. Buddha was the first to be enlightened, but from a Buddhist perspective, this level of awareness is possible to all people. Buddhism and psychotherapy both aim to balance the ego with a greater sense of self. We need an ego when we are children. Our family builds our ego structure so that we can survive in our environment. The ego offers us protection and a sense of self. In fact, life without an ego structure would be unbearable. But as we mature, we can learn through meditation and mindfulness practice to relax those structures. We can connect to the world and to nature in a more authentic, meaningful way.

The 450 million Buddhist practitioners worldwide believe that suffering is caused by grasping or clinging onto material or egoic things.

Suffering ends by developing the discipline to let go of attachments.

We accept the world by accepting ourselves through mindfulness meditation and reflection. The qualities of compassion and kindness bring us into relationship with our past lives and the Karma (consequences – good or bad) that they have caused. These core beliefs are known as the Four Noble Truths.

The Buddha spent the last 45 years of his life travelling and teaching. Soon after his Enlightenment, the Buddha had a vision in which he saw the human race as a bed of lotus flowers. Some of the lotuses were still covered with mud, others were just emerging from it, and others again were on the point of blooming.

Buddhists believe we are all capable of reaching our ultimate goal or potential. Sometimes we need a little help to get there. So the Buddha decided to teach, and all of the traditional Buddhist practice may be seen as attempts to fulfill this vision — to help people grow towards Enlightenment. So, Buddhism and psychotherapy have the idea of growth in common. These ideas bring a sense of freedom and lack of striving. Once we can stop seeing meditation or mindfulness exercises as yet another thing to add to the mind’s to-do list.

It’s interesting that Theravada Buddhists and Tibetan Buddhists celebrate the Buddha’s birth, Enlightenment and death in the same festivals (Vesak or Saga Dawa Duchen). This reinforces the idea of Impermanence – that the Wheel of Life turns and where we are in that is irrelevant. The Tibetan Sand Mandalas represent this, as monks lovingly create pictures out of sand then blow them away. All beauty in this world is corporeal and ends. By accepting this in life, we can also accept or even embrace Death. Dying is the ultimate in Impermanence. It is a threat to the ego’s existence, so our mind will push thoughts of death away. So, this makes Buddhist teachings very useful working with clients in counselling.

What creative therapies can help us to see is that we can be alright, even through changes that our minds find very difficult to accept. We don’t need to understand everything that happens to us – we don’t need to analyse life so much – we can just accept and be where we are.

So, how do Buddhism and psychotherapy work together?

I mentioned earlier that both Buddhism and creative psychotherapy work to free us from the limitations of the mind. Transpersonal psychotherapists like Ken Wilber

brought Buddhist teachings into working with clients in the 1960’s and 1970’s, a a time when an interest in spirituality and Eastern meditation practices was growing in Western psychology. Writers such as Mark Epstein  have also pointed out the parallels between the work of psychodynamic therapists and Buddhism. Talking therapies can only take us so far. I really believe that for the ego – the mind – to be able to let go it has to have the faith in being held by something bigger. You can call that something bigger God, Spirit, the True Self (Winnicott) or simply a faith in ourselves or other people.

We can learn to accept ourselves as we are

What do I mean by that? Well, to Freud and Jung the aim of therapy was to help us transcend the ego so that we can live in a way less dominated by the mind. Freud worked to make the personal unconscious conscious, which gives us more freedom in our choices. Carl Jung took these ideas further, developing the concept of a Collective Unconscious full of archetypes, potential energies beyond the reach of the ego.  Epstein talks about the importance of sitting with the not knowing . Which is of course the key idea behind the Buddha’s teachings – that we can transform and grow without needing to know in a cognitive way what the world is doing, we can learn to accept all of the things around and within us.

Buddhism is sometimes described as a philosophy rather than a religion.

Mindfulness is an attitude to life that can be used in any (or no) spiritual tradition. Buddha is as likely to be a garden ornament or on a bar as he is in a temple.  He is designed to exude peace and harmony. Yet, he himself only attained grace after a long and personal struggle with his Self and his Demon. So, Buddha is a very useful reminder that change in life requires commitment and takes practice. He shows clients that we need to change attitudes and let down defences which are holding us back. Both Buddhism and psychotherapy encourage reflexivity or curiosity about ourselves.

So, Buddha is a very appropriate figure to represent coming to peace with ourselves in sandplay.

The Buddhist teacher is especially relevant to transpersonal and creative forms of psychotherapy, such as sandplay therapy. The Buddha is a symbol often chosen by clients of all ages. Children often choose him as one of their first figures: they seem to naturally gravitate towards him. The Buddha represents compassion, kindness and reflection. Children and adults long for these qualities when they first come into therapy. Buddha often is used throughout counselling to represent the more peaceful part of the client. I think it is a good sign when Buddha is part of a client’s chosen vocabulary of symbols. Clients can discover that whatever is happening in their life, there is already peace within them. Therapists can help the client remove the barriers to that.

The Buddha often has one hand up to heaven and one to earth. He can also have one hand in his lap and one hand extended in a peace gesture. Both depictions are about the balance between the sacred and the profane. Sandplay therapy is about helping us to find that kind of balance within ourselves. It is a very kind and non-verbal way of connecting with a larger sense of self. Sandplay also calms the mind, which finds it hard to understand the symbolic play. The mind will eventually surrender to the play.

Buddha leaps off the shelves into the sand, when clients are able to find that balance in themselves. He also reminds us that Enlightenment (being happy in our skin) comes only after a lot of spiritual practice. Life is a continual, renewing commitment. For me, he is one of the most human spiritual teachers, so Buddha Jayanti – Happy Birthday.